I knew that SCOTUS was going to deliver their decision this month, but was running errands yesterday morning when the decision was made public. When I got home and booted up the computer, I was gobsmacked. For the first time in my life I was a full, first class citizen of this country with all the rights that the rest of you take for granted. My long time partner and I could get legally married.  I didn't think I would feel different, but did I ever.

Will this stop the reviling, the profanities, the open and out loud hatred stop? I doubt it.  Haters will continue to hate, but we were the last people that it was OK to hate out loud. That probably won't stop because people need somebody to hate and if they don't have a group of people to hate, they will find one.  Even our own government said it was OK to beat us up, to kill us and walk free, to hurl profanities in the streets when we walked by.  We were denied services, fired from jobs and often not hired at all. During it all, we carried on, were successful people, often trend setters and in the public eye.

I saw acceptance starting to happen in the past ten years or so and states started to allow marriage.  It was seen as such a perversion that people threatened to leave the country or burn themselves up. Seemed a bit strange and I saw no smoke in the sky yesterday.  I would sincerely hope that no one set themselves on fire and they don't have many other countries to emigrate to, but if they see fit to do that, I would never stand in their way.

So as of yesterday, my partner and I can marry.  What a feeling it will be to check that little box on forms, to get our legal affairs in order and not have to form a corporation just for inheritance rights. We can file taxes as a couple, can visit each other if hospitalized and claim Social Security as spouses do.

Wonder how long it will take before marriage will just be called marriage and the words 'gay marriage' will fade from this country's vocabulary.

Sure we will still be reviled by some of you, but here we are. We're here, we're queer and we are now equal! 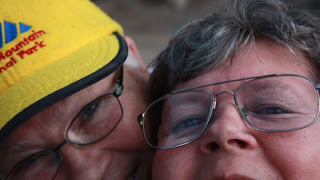