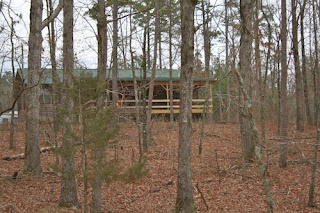 Photo is of our house from the ravine it overlooks.

We have a good friend who quit her job, sold everything she owns, packed her belongings in a 20-pound backpack and is now a pilgrim on the Camino de Santiago in Spain.  When she finishes walking that, she will travel to South Africa and who knows after that.  If she ever returns to everyday life (and she doesn't plan to), she will undergo culture shock of the first order.

Culture shock is very real.  Most of us live in cities or suburbs, go to work every day, drive a car, there and back, get gas, shop in malls or big stores, see loads of other people and have to interact with them.

We don’t realize that we are in a heightened state of anxiety and awareness because of the assault on our senses day after endless day.  We aren’t even aware of what civilization is doing to us.

I had a year long motorcycle trip years ago before I was stumbling, falling and needing mobility assistance.  I had a tent, a sleeping bag, a pan, plate, knife and fork and some clothing. I was still in civilization some of the time  but was  mainly in the woods in a tent.  The only decisions I had to make was which way to turn my bike and what to eat for dinner.  All I had to do was live in my surroundings.

I spent some of that time in cities, but very little and usually only to get from one place to another. I stuck to the blue highways and rarely rode on an interstate.  When I rained, I got wet. When it was cold, I was cold too. When it was hot, I sweltered. But most of the time, the weather was wonderful, not a factor at all. I had a root beer at the Long Branch Saloon - did you know they don’t sell beer there?

I spent weeks in Rocky Mountain National Park, in Arches, Bryce, Zion, Kings Canyon, Sequoia, Yosemite, and up the CA coast to WA. I turned right there and went across the top of the country through  Glacier, Yellowstone, Tetons, Mt Rushmore and then through Michigan to New York via Canada.

I left NY went north through New England to Maine and back southwest on the diagonal through Memphis to Santa Fe.

When I returned to New Orleans a year later, it took months of getting used to the noise, the pollution, the noise. I was startled every time a garbage truck went by and OMG, a police or ambulance siren would wake me immediately. People were everywhere and they expected things from me. Things like saying good morning to people or answering a question.  Overreaction was common. That’s called culture shock.

We traveled often over the years, seeking that same peace I found while living outdoors. We found it, but always had to return to civilization to earn money to leave again.

When I retired and Donna was close behind, we found our little cabin in Mountain View AR.  There are no street lights here, no garbage trucks. The closest thing we come to light at night is when the moon is full.

We live on a mountain, albeit a tiny one, all of 1200’ in the air. Our house is in a forest, so we hear and see wildlife daily. We found our woods again and are lucky enough to live in it.

I suspect if we had to travel to a big city, we would go through culture shock once again. And I never want to do that.