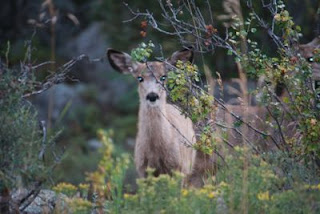 Photo is of a curious deer making his way to our front porch looking for apples.

What is it about killing helpless animals, mostly deer, but other animals as well, with huge guns that make people feel as if they have accomplished something?

Guns kill. I don’t want to hear any bullshit about people kill, not guns because it’s people with guns that do the killing. If they didn’t have guns they wouldn’t be doing all that killing.

But the point here is that those gun owning people have a season set forth for them to specifically go out into the woods and kill things.  For the life of me, I can’t understand that.

Around here,  pictures of young children, a gun and their first dead deer are featured in the local paper.  As if they should be proud of killing an unarmed, defenseless animal, after which they leave it where it lies, go home and celebrate.

We live close to a hunting club.  Seems to me that it’s mostly a place for men to come and drink themselves silly and then go out and kill things. They kill deer, dogs, cows, other men, anybody who gets in their way and moves.  They then leave behind the deer and the dogs. I suppose they brag about it when they get back home.
“Hey honey, I bagged a labrador today.  Left it layin’ there.  Same with the deer I killed. No reason to drag it home. We don’t eat it anyway.”

Along with killing animals, the hunters kill a few people along the way.  Funny, they wear strange clothing called camo. I suspect it’s so they can’t be seen by those deer. And then they are supposed to wear orange vests so the other shooters can see them and not kill them by mistake. So many hunters shoot at whatever moves, so orange vests or camo or whatever, a few guys get killed every year. And occasionally, a bystander gets shot or a woman standing on her porch wondering what all the noise is about and finds out by getting shot by some fool with a gun.

There are so many things in this world I don’t understand. And killing is one of them.
Posted by Unknown at 6:19 AM