Remember when you were a kid. For me, it was in the 40's.  I know that most of you don't even realize the 40's existed, let alone lived through them, so I consider it my duty to give you insights into being a kid during the 'good old days.'

First of all, TV arrived in our little town on Lake Michigan about 1948.  The first one was in an appliance/furniture store window downtown.  The crowds standing outside would have drawn the police today. Maybe then too, but all they would have wanted was to see that miracle of moving pictures on a tiny screen.

When my parents got one, we would turn on the TV, let it warm up for 5 or 10 minutes and then watch a test pattern for hours.  Soon we could watch real programs. Howdy Doody was a favorite of mine. And then it was out the door to play outside.

We played outside after school and on weekends. Didn't make any difference what season it was.  The difference was we wore shoes, socks, and boots in the winter. Probably a jacket too.  When our mothers got sick and tired of us, we were thrown outside and the door to play. We found neighborhood kids and played games that we made up. Or games that our grandparents taught us, games they probably learned from their grandparents in the Netherlands.

One thing remained constant through our growing up years and even beyond. In the summer, the outside door had a screen on it. And that screen door had hinges on one side and a heavy spring on the other, so it would spring closed if you let go of the handle quickly.

And it never worked. Screen doors were made for slamming.

For some reason, no child on earth, up to and including today's can close a door without just letting it slam.  So we all heard, "Don't. Slam. That. Door!" each and every time we used it.  To protect the screen doors from an early demise, protectors were sold. The were usually metal and had some sort of decoration on them. I have no idea what they cost, but probably lots less than the ones in antique stores today where I found this one: 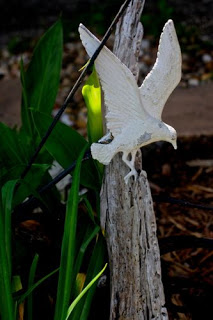 I look at it and can still hear my mother hollering at us to Stop. Slamming. That. Door.
Posted by Unknown at 7:01 AM

Email ThisBlogThis!Share to TwitterShare to FacebookShare to Pinterest
Labels: Early TV, good old days, growing up in the 40's, playing outside, screen doors