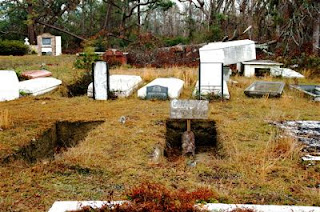 The storm lifted vaults out of cemeteries. Many of the remains are not back in the right spots yet.


I retired 10 years ago today. I was not aware that I was going to retire that day until a few months later.  You see, we evacuated in advance of Hurricane Katrina. She hit on 29 August 2005. And when she hit, she decided to take our house with her as she blew on to Mississippi.

We drove to Columbus MI. Donna was 4 days out from gall bladder surgery and was not ready to pack for evacuation, let alone drive. We had more than one car and I had my work vans. Thankfully, my employees drove my work vans, Donna’s youngest boy and his fiancee left their cars at our house and drove another car.  They had to find and pack their essentials. Ours stayed in a go box all the time, so all we had to do was put it in the car.

The go box contains all necessary papers, insurance papers, legal stuff, birth certificates, SS information, medical information, car titles, you know, that kind of stuff. We packed all of our computer equipment, camera equipment, photo negatives back to 1969, family pictures, boxes of photos that we did not want to lose.  Good thing we packed all that stuff because that’s all we were left with. 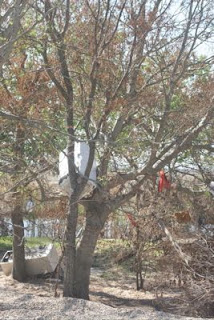 That's a refrigerator in that tree

We learned that the house was destroyed from one of Donna’s clients who stayed behind and made it over to where the house was. She called and told us, so we kinda know what to expect when we finally got there. 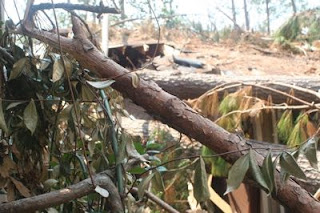 There's a house under there somewhere.

We had to stay in North Louisiana until we could get back to Slidell, an across Lake Pontchartrain suburb.  When we rounded the corner to our house, we were in shock the moment we saw it. We had 120 trees on our acre and 100 of them were down with over 20 on the house.  I knew immediately the house could not be saved. 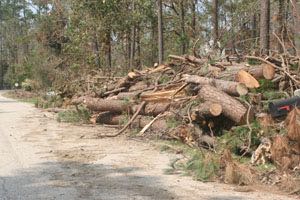 First we had to remove all the trees, both from the property and off the house.  After they were removed we had a 30’ high x 200’ long pile of logs in front of the house.  FEMA people came by and took it away. We would never know where it went.

Second we had to get the house bulldozed hauled away. Donna did lots of salvage work in 100º September heat. I was busy supervising the demolition workers.

We were traveling back and forth every day from Donna’s sister’s house near Baton Rouge, La

Donna’s clients were finding her in parking lots, in her car or theirs. After Walmart reopened, they found her in the aisles.  People were desperate for help and saw their therapist as invincible.

We got the house down and hauled away. Now we needed a place to live.

We have so many stories, so many things and so much work to do. We had to fight with our insurance company, the mortgage company, the phone company, electric company - well you get the idea.

I will write more because there was so much more. 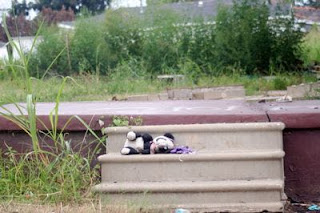 Nothing but a foundation and a child's beloved bear left behind

Until then, we do remember, even 10 years later.

And after the storm took everything, 3000 people died, I never worked again. 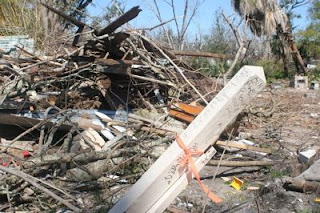 Friends'  house. We left a message on that gate post. It was all that was left.  We found them almost a year later. They have since rebuilt on the same piece of land