Scootering at the Ozark Folk Center

Finding an accessible tourist attraction around here is difficult at best.  The Ozark Folk Center, spotlighting the way Ozark living was generations ago, is a living museum with real practitioners of their crafts like blacksmithing, printing, broom making, weaving and even coopering demonstrate their crafts daily.  The Folk Center is accessible to everyone. Someone has to open the doors for the scooter rider and getting around in the gift shop is close to impossible, but inside the park is easy, Paved, wide paths making seeing the exhibits a piece of cake.

One of the biggest reason for tourists to come to Mountain View is the Ozark Folk Center.  One of the events the Folk Center is famous for is their Heritage Herb Garden developed and maintained by Tina Wilcox, the head gardener. 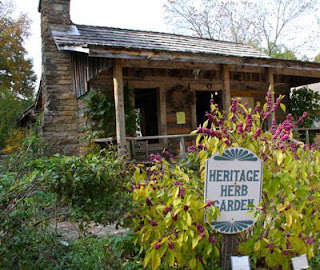 In 1986, Hillary Rodham Clinton said of the Ozark Folk Center herb garden, "It is not just a decorative garden, it is a repository of past knowledge"

This 'repository of past knowledge' began humbly in 1977, when volunteers began to bring their own herbs and ideas to the Ozark Folk Center to start a dedicated herb garden. Volunteers transplanted seeds from their own garden and sowed the idea of the Heritage Herb Garden.

Elizabeth Warner, one of the first volunteers, was also instrumental in organizing The Committee of 100, which organizes fundraisers (the first in 1982) for apprenticeships, equipment, and authentic displays. To quote Hillary Clinton, Mrs. Warner's “...main objective" was "to create a garden that would become nationally recognized ... a center for study, workshops, and seminars, and thereby increase attendance to the Ozark Folk Center.”

Mrs. Warner and the center's other volunteers did, indeed, accomplish their objectives. A testimony to these achievements is the Heritage Herb Spring Extravaganza.  Each spring and fall, leading American herbalists spend a weekend in the Ozark Mountains to teach, share and learn. 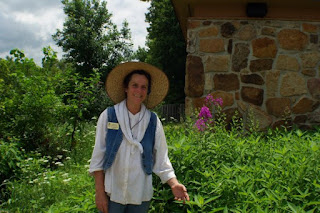 Tina Marie Wilcox, hired as a gardener for the folk center in 1984, continued sowing seeds and ideas of these first volunteers. Today, the herb garden is a living, breathing, ever-growing repository of past knowledge, and a hands-on teaching and learning experience for all who come to the Ozark Folk Center.
She has carefully organized the semi-annual fests to showcase the herb garden by opening it for the season with speakers, teachers, and general fellowship every year combined with fantastic food made from the very herbs picked fresh from the herb garden.
At a recent year's extravaganza,  well-known herbalists, Rosemary Gladstar, Steven Foster, Sasha Daucus, Susan Belsinger, Kathleen Cannole and Jennifer Blankenship joined Tina Marie Wilcox in the quest to carry out Hillary Clinton's aims.  For two days they educated and entertained their eager audience of almost 200 as they wandered around the Ozark Folk Center gardens. Attendees were ‘mixed and matched" in groups and all had the opportunity to learn from each herbalist in a more intimate setting

"Here's some henbit," she pointed out.  And, further along, "Chew on this", she invited, as she agilely stretched and grabbed a handful of Chickweed and said, "Pass it around."  The crowd happily chewed as Susan explained, "These and other 'weeds' are usually mowed down... but they can be valuable as medicinal teas or poultices, and many are delicious in salads and cooked dishes."

These culinary herbalists used these "weeds", and many others herbs, in planning and, with the help of the dedicated staff at The Skillet, a restaurant attached to the Ozark Folk Center in executing a scrumptious lunch for workshop speakers and participants.  Second helpings were common and no one knows how many absconded with the delicious herbal biscuits as they reluctantly departed the restaurant.

Steven Foster, (seen below) who became interested in herbs in 1974 in Maine, bussed one group to Mountain View's city park to view thousands of blooming wildflowers, but upon arrival, discovered that all plants had been mowed down.  Undaunted, the laid-back Foster, whose mentor was Rosemary Gladstar, went on with the show. 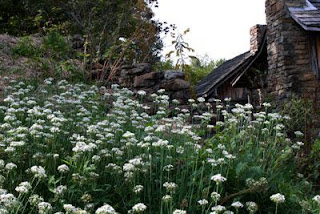 Jennifer Blankenship, a pharmacist, farm owner and supplier of Townsend Spice and Supply, spoke to participants in the cool of the center's auditorium.
Ms. Blankenship encouraged blending herbal and traditional medicine, pointing out that herbal remedies will become increasingly more important as the costs of traditional medicines skyrocket. "Your knowledge of the use of herbs for medicinal purposes will be very important." Ms. Blankenship will soon chair The Committee of One Hundred and continue to lead the volunteers in their fund raising activities for the Herb Garden.
Sasha Daucus, a master herbalist and energy healer has been in practice since 1984 and is the owner of The Golden Light Center in the Missouri Ozarks.  Sasha and her groups traipsed through wooded areas - from the folk center to Mt. View's city park - stopping here and there to examine medicinal plants and discuss their uses.  Laughing, one participant was overheard saying, "Sasha is gonna have to give me an 'energy treatment' after this hike.”

Kathleen Cannole, the Ozark Folk Center's nursery specialist and artistic gardener, lead groups around inside the center, explaining the genesis of the pond and waterfall, as well as how to best grow some of the herbs native to the Ozark area.  Ms. Connole earned a BS in Plant Science and Ornamental Horticulture, "after my kids were grown".   She, however, admits that her knowledge has grown in leaps and bounds since apprenticing with Tina Marie Wilcox and beginning work at the center.

The Herbal Workshop is presented every spring and fall by The Ozark Folk Center.  Attendance has grown every year and will continue to do so. This event is a semi-yearly highlight of the Folk Center and makes it a destination for anyone interested in using herbs medicinally. 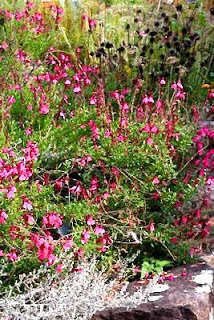