Being a First Responder after a Hurricane

Hurricane Camille hit the Gulf Coast of Mississippi in August 1969. I had been in New Orleans since January of that year, fresh out of Chicago and barely knew how to spell hurricane, let alone had ever seen one.

My next door neighbor was Maggie Russell, MD. She was doing a psychiatric residency having just come out of a successful family practice.  We evacuated because I saw birds flying North in the middle of August. Made sense to me.

After the storm hit, Civil Defense arrived to take volunteers to help. Because Maggie was an MD, she was first in line. She gave me a white coat and called me an MD as well. I wondered about their being two Dr Russells, but she said no one would notice and she was right.

We flew across Bay St Louis in a helicopter, not to return to New Orleans for over a month.
First thing we did was assess the situation and realize there were few injuries that required hospitalization. Either the people there were slightly injured or they were dead.

We set up field hospitals from Pass Christian to Gulfport. The hospitals weren’t much. We stole from drug stores to get aspirin and rubbing alcohol. There was no running water and we needed to wash our hands somehow. Alcohol did the trick.

We rubbed any marks off the aspirin tablets so no one would know what they were and gave them out like M and M’s warning people to lie down after taking them as they were powerful tranquilizers. People did what we said because we had white coats on.

Most of the people who came to the field hospitals were people who had everything they owned in a shopping bag and most of them could not find any other members of their families or friends. For that matter, they couldn’t find their houses either.

Beside putting bandaids on, cleaning scrapes and bruises, I had one job, only one job. By day two we had military help driving what they called a 6 by 6.  They went everywhere collecting corpses. We had them lined up in the area just outside the high school where we had our hospital.

I had the guys stack the bodies in 5's. Four side by side and one across, so I could count them easily.

Every night, Walter Cronkite sent a runner over to get a new body count.  I would count the ever increasing stacks and send the runner back with the new numbers.

After a few days, Maggie and I had a chance to take a break. We walked among the corpses and noticed something we had not seen before. Some of the dead had their Sunday best clothing on. Wool suits or dresses - remember, this was mid August on the Mississippi Gulf Coast.

Suddenly we realized at almost the same time that some of these folks were long dead, were not killed in the storm at all, but had been pushed up out of the ground by flood waters. 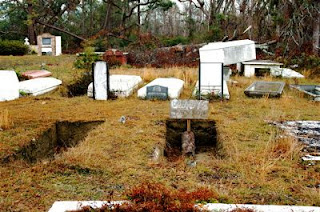 The same thing happened after Katrina, but by then we knew what it was. In 1969, we didn't.

So when Cronkite’s runner arrived that night, I realized I did not have a correct count and perhaps never would. I tried to explain, but could not. So Walter never got a correct number.

To this day, no one really knows how many fatalities Hurricane Camille produced.