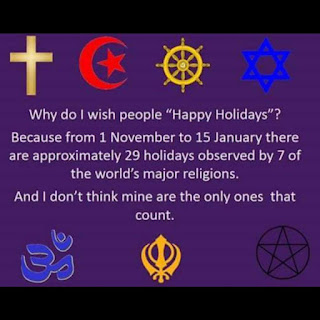 It’s Christmas time again. Everyone is so excited and want to celebrate peace as the holiday suggests.

But most Christmas celebrators are rushing around to malls spending money on things nobody needs or wants just to keep the big box  corporations’ profits coming in to fill the pockets of the CEOs. Or to show off to gift recipients that they have lots of money to spend.

The Christians have started their frenzied run-up to their holiday.  The nativity scenes are in yards, but for the most part, not on public lands, much to the Christians dismay.

But yet, you see they think that because they are so vocal in their hatred of other religions that they should be able to have the ‘freedom’ to impose their beliefs on the world in front of courthouses and other public spaces.

They also think that members of other religions need to be killed. That seems strange, doesn’t it, when Christianity, just like all other religions teach that killing is wrong, no matter what.

There are well over 20 major world religions that celebrate a holiday this time of year, usually honoring the changing of the season and Christianity is one of them. Why they insist their way is the only and best one, I will never understand.

And even if they do, why must they force it on others, even to the point of advocating death to the believers of other major religions.
Even now, radical Christian extremists are killing Muslims in the streets and sidewalks of the US.  And worse yet, the leaders of the Republican party are running on platforms that include blasting the countries who have Muslim populations off the face of the earth.

Do we study the Crusades and the reason for the killing that happened during them in the name of Christianity?

How about the Spanish Inquisition and the mass murder involved?

Are we really a country who thinks this way? I know we were when adolescents had a minor uprising during puritan times and religion resulted in the killing of women, a few men and some dogs who were considered witches.

Again, we saw it in Germany when Hitler ordered Jews, Romani people, Gays, and disabled people to be put in camps and exterminated.  And over 6 million people were killed.

During WWII, the Japanese were packed off to internment camps  because they were thought to be a danger to this country. Really?

And here we are again. Threatening people with death because of their religion. Have we learned nothing or are we simply blindly following so called leaders who yell the loudest?