Evolution and Other Divisive Observations

Evolution:  Hundreds of thousands of misguided folks do not believe that evolution is how we got here.  And I know this will not convince them because they choose not to believe facts.  Here's the only fact you really need to prove evolution:

Post WWII, antibiotics worked on bacterial diseases.  Now many diseases are antibiotic resistant.  What happened?  The bacteria evolved! As they needed to survive, they changed. And as they change more, we make the antibiotics different. It takes less time now for the bacteria to change than it used to. We don't have many antibiotics left because they are no longer effective.

It’s what happens when any living thing needs to change to survive. I fully expect children to have enormous thumbs in a few decades because of their use of cell phone texting.

On a different, but kinda related note, in a Catholic church in New Orleans, if you turn the chandelier light on,  you can see a shadow of what the believers are calling Jesus.  (I know that sentence is convoluted and probably not grammatically correct, so don't start with me.)  A friend thinks it looks like Che Guevara.  Or more likely just a shadow.  So turn the light off and stop with the kneeling in front of that column, OK?

And who knows what Jesus looks like?  Were you there back then? He certainly was a middle eastern Jew, so dark skinned and probably curly haired. We really don’t know if his hair was all that curly as you see in that shadow. He certainly was not blonde and blue eyed as he is portrayed by US Christians.

Guess that church will have to leave the lights on and put a bigger collection box next to the apparition.  After all, the church needs more money to defend all those pedophile priests and it needs all your dollars to keep women from being priests.   It could find an origami expert and have lots of shadows that would correspond to whomever they wish. Wonder who would bring in more money? The Pope or Brad Pitt? 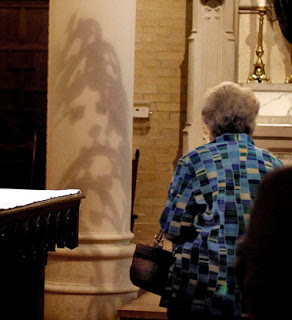 Now in December 2015, I have no idea if the shadow is still there or not.  I expect not and the collection plate donations have most likely decreased. Time for more shadow art, doncha think?