Well, we live here of course. Actually the two of us comprise the staff of all the other residents of both the house and the grounds. That sounds elegant, doesn’t it? Well, it’s far from elegant.  We live on top of a mountain - they call it that. It’s actually a 1200 foot tall hill in the Ozarks, which really aren’t much in the way of mountains either. Not after the Rockies. I mean, c’mon. 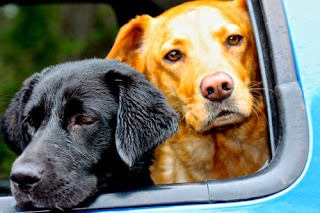 So two dogs live here and sleep inside. Most of the time anyway.  The black one who has a mind of her own occasionally decides to sleep outside, so of course we provided a soft bed on the front deck for her to sleep on.

And this is what they do when they are not chasing squirrels or other dangerous animals outside.

Bella arrived in our driveway here before we moved in. We were in our RV in the driveway when we heard a dog yelp in pain. She found her way to the RV door whimpering. It was raining, so we picked her up and in she came, wet and cold. She was a pup. We made the decision to take her to the vet and then to the animal shelter. And then Donna named her. Right then I knew that Bella was not going to any shelter. 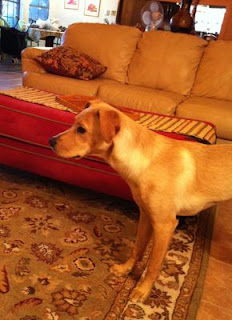 The vet said she was probably about 4 months old. That was in March of 2011, so she is about 4 years old now. Whoever abandoned her and pitched her out of their car 4 years ago should be taken out and shot. How can people do that to animals?

Anyway, Bella is probably mostly Golden Retriever, has the black tongue of a Chow and who knows what else is in her DNA. She has very long legs for a 65 pound dog. 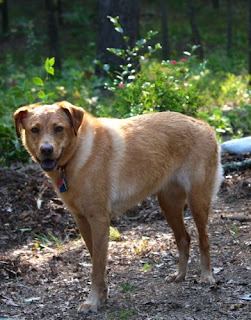 Bella’s talent is eviscerating doggie toys. She can have the floor covered with stuffing in 5 minutes. She is also an uncertified therapy dog. Bella wants only pats and scratches. Many of Donna’s clients came mostly to see and pet Bella. Donna and therapy were an afterthought.

Sandy was abandoned in Slidell LA. She was found by a neighbor of ours who already had 8 dogs. Or maybe nine. Anyway she sure didn’t need any more dogs, so Sandy came to live with Donna, Bella and me. Oh, and her name. I know she is a black dog, but the woman who rescued her, our neighbor, is named Sandy, so now we know two Sandies and one lives in our house and gets waited on, foot and foot. 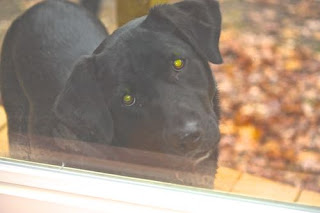 May I come in now, so I can go back outside?

They are both double coated, web footed water dogs and go in the filthy stagnant farm pond that sits on the rear of our property. And then want to come in the house right away. They stand to get toweled off, but reluctantly.

We have other boarders around here. I may visit them tomorrow and introduce you.